Mon Oct 23rd
10:15pm What an exciting day! I did not have a good night’s sleep, tossing and turning and hearing the garbage trucks at 6am. But I showered and looked forward to having breakfast in the hotel’s café. It was OK, but nothing great, just coffee, juice, and croissants. They were not rude just not overly friendly, no small talk, very dry. I had scheduled a “Classic Walk” tour so I pushed myself into a good mood. I went to the meeting place on Pont Louis (the only bridge that connects the small two islands together) early so I would know where it was, then I had an hour to kill. 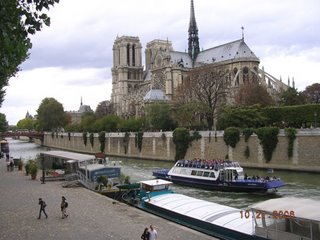 I walked to Notre Dame and went inside. No need to be religious to appreciate the grandeur and history of the place. I sat and did all my inner talking then went to meet my tour guide.

My tour guide was a 20something guy from Philadelphia named Charles.

He was taking a year off from grad school to bum around France. He found the tour job on Craig’s List. Two other couple’s joined us: a quiet but nice young couple from Australia, and a very nice husband and wife with their adorable baby girl from Ottawa. (Again I was a single with two couples). Our first stop was the Notre Dame and Charles gave some great information. 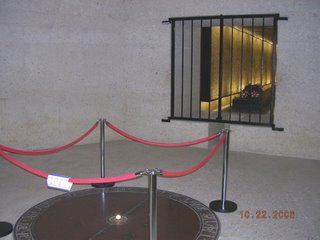 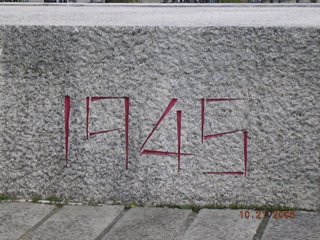 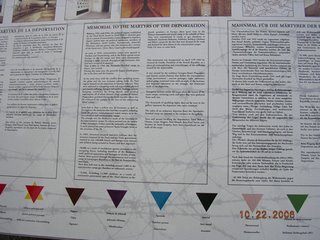 We took a detour and stopped by the Deportation Memorial for those martyred in 1945 by Hitler. These were the Jewish children taken from Paris to the concentration camps for elimination. My eyes welled up with tears.

We continued to St. Chapelle which was built to house Christ’s crown of thorns. Thanks to carbon dating it was proven to be a fake, but is still housed there and people still do a pilgrimage.

Onto the Louvre, the grandest museum in the world. Exciting! We passed the Musee D’Orsay which is world famous for its Impressionist collection. I would love to visit here if I have time. We walked through the Jardins de Tuileries and sat at a nice café for lunch. Then it was onto the Place de la Concorde, the site of royal beheadings during the French Revolution. We viewed the Champs-Elysees and the Arc de Triomphe. 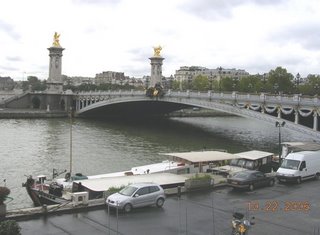 We walked over the Pont Alexander III, the most beautiful and ornate bridge in the city. It was modeled after a bridge in Russia. We continued to Les Invalides and Napoleon’s Tomb and the Ecole Militaire, a former military school.

We ended the tour at the Eiffel Tower and said our goodbyes. It was a wonderful tour with a super tour guide. I sat there for a while, then started my way back. 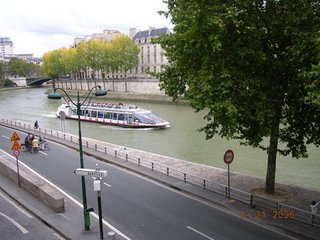 I walked along the Seine for a while when a pretty olive skinned woman walking toward me bent down to pick up something at my feet. It was a beautiful man’s wedding band. She asked me if it was real, and I checked it and there was a stamp of 18 Karat, so I told her yes. She seemed delighted and offered it to me. She was very insistant and after a while I accepted. She walked away and I started to when she poked my in the back. She said she was hungry and wanted money for the ring. Scam the tourist! I know I looked like a tourist but… first thing I did was to check that my wallet was in my pocket and it was. I tried giving her the ring back but she wouldn’t accept, I pushed it into her hand and stopped speaking and quickly walked away from her. She turned and walked away too. I checked everything in my pockets and all was safe. That really blew me away for a while, cause I’m very careful and I have both eyes open, but I wasn’t ready for that. Well it did teach me to keep my eyes open even more.

I was very tired from walking and wanted to go straight back to the hotel, but instead I went back to the Louvre to take a picture of the Inverted Pyramid. From there I entered the Metro for the first time. Ahhh, standing at the auto ticket machine trying to buy tickets and it was rush hour so I had a line of irate French people huffing. But the couple next to me assisted me and they were very nice. So again, contrary to rumor, I really have not found any French rudeness so far. Now the Metro, you walk through endless confusing tunnels before you get to the platforms.

The trains are very new clean and the wheels are rubber so the trains hum instead of making the terrible noise the steel wheels making in the New York City train system. Heavy accordion rubber separates the cars so you can actually see all the way to the end of the train. Every train station is designed different. Very nice. I came back to the hotel exhausted, turning the TV on and rested a bit. I was tired but hungry so I went out and brought some French Chinese food back to my room and ate there watching French TV… The only English speaking channel was the French version of CNN news. They have a Saturday Night Live type of comedy show called “Ding Dong” with very funny physical sketch comedy. I then watched a French movie with Bridget Bardot, and called it a night. Another long day scheduled for tomorrow, I’m going to the Eiffel Tower to go up it and take pictures of the city. Then it’s off to the Catacombs, and at 2pm I have another walking tour, this time of the le Maris area.