September 1st… where the heck did the summer go!
It’s Labor Day weekend already, way too fast for the summer to end.

Had a great dinner last night with friends at a wonderful Greek place… Uncle Nick’s.
Located on 9th Avenue in the heart of Hell’s Kitchen here in New York City, we sat in the garden area in the back & it had quite the charm about it.
Maryellen, Yana, Judy, Angela (our reining Greek Goddess), and myself were in attendance. We are co workers/friends at a not for profit theater company (Plays for Living) that deals with bringing awareness to social issues in the home, community and workplace. We all started with appetizers: Fried smelts, pita bread & dips of all types with lots of garlic, and the flash fried cheese wrapped in filo pastry. And to wet our palattes we induldged in a fruity sweet wine from Samos. Everything was so good we could have stopped there. 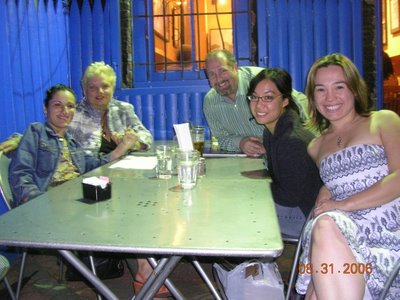 For entres there were Sauteed Scallops, Mussels, Spinache Pie, Some kind grilled fish that came with head & tail intact, and I had the “succulent spring” lamb chops. The food was fabulous! Dessert brought us a carmel flan, a custard wrapped in filo pastry (I had that… yum!), Baklava, and a fresh yogurt with honey & walnuts. Oh my god! What a meal, the food was fab! The company was even faber! All co workers should take an example and get along as good as we do. In absense were Eunice who was on a trip to the Carolinas, and Jenny who was under the weather. Eunice we’ll take to dinner when she returns, but for Jenny we dropped off flowers and chocolate ice cream (her favorite) on route to the restaurant.

With September beginning, I am going over my budget for the next 2 months… I leave for France in 6 weeks. I will need more $$$, so I called the union office for my ushering and I’ll work a few performances each week (if they can find the work for me as a substitute usher) and when I return from France, the show in my home theater (Vivian Beaumont @ Lincoln Center) will have begun (The Coast of Utopia by Tom Stoppard).

Speaking with my agent, I’m cautious on what auditions to go on, don’t want anything that is in rehearsal or shoots during the time I’m away.

Shooting a short film this weekend with some friends for festival circulation. Next Tuesday starts the 1st September work week.