Wed Oct 18th
9:45pm Breakfast again & that wonderful coffee. I also indulged in baguettes with butter and the most delicious fig jam. Then we were in the van and off today to Savoie.
Savoie was annexed to France in 1860, originally belonging to Italy. Savoie is famous for it’s cheese and wine. Once in Savoie we headed to Chanaz Village, home to a 19th century walnut mill, now a historical monument and the last one of it’s kind in France.

We were given a demonstration and he was quite a comedienne. At one time the entire mill was powered by a water wheel, but now due to global warming, there is not enough water to supply the electricity needed, so it is supplemented by real electricity. Everything inside is completely manufactured by hand. Walnut, hazelnut and almond oils are made here as well as jams of the above. We were given a tasting and … yum! So we all headed straight to the counter where we purchased items. I bought a bottle of hazelnut oil and a jar of hazelnut jam. Oh I almost forgot, I also bought the walnut cookies, which were like macaroons without the coconut, but lost of walnut. Once outside I shared them with everyone and we all had smiles on our faces. We had our picture taken with all our pinkies up because the walnut oil man let us taste the oils with our pinkies.

He said the pinkie is the cleanest finger on the hand. This Chanaz Village was like a village that time forgot. 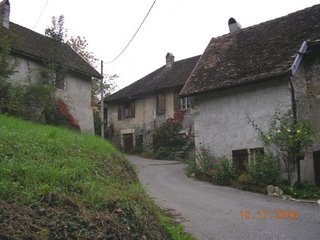 Nestled at the based of a large mountain, which was shrouded in mist, it had a canal running through it. July and August are the prime months, so it was quite empty even though people live there year round. Exciting!
Then we went to Aix-les-Bains and even the name is exotic. It is the 2nd largest spa city in France.

We took the boat across the Bourget Lake which is the biggest natural lake in France, surrounded on all side by majestic mountains.

Once at the other side we went to the 12th century Hautecombe Abbey, burial place of the Dukes of Savoie and the last King of Italy buried there in 1983.

This abbey is now a sanctuary for young adults just out of college to come to for 3 months and find their “meaning of life.” Room and board in exchange for working on the grounds in jobs various job from ticket taker for the Abbey to moping floors to landscaping. Don’t forget that all schooling in France is free. Yes free, did you hear that Bush! So not only are health benefits free but all schooling is as well. We had to catch a boat that was headed up to the far end of the lake so our ride back was a soothing and calm 1 ½ hours long.

Back at our home base dinner started with a colorful plate including lentils and beets. Our main course was a mouthwatering veal roll with creamed spinach.

Next was the very familiar cheese plate with some variation this time. Our meal ended with crème fresh, lemon sorbet, black currant glace and some raspberries. 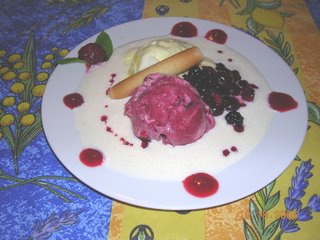 So far this trip has been everything I expected and so much more. Never would anyone ever get to see all these things that are not normally considered tourist attractions for Americans. Why? They are so far … “off the beaten track”, which is what the tour is called.
Please visit their website: WWW.FRENCHESCAPADE.COM
Tomorrow we are headed to La Cote Saint Andre so I need a full nights worth of sleep. And to think I still have Paris for 5 days when this is over on Sunday… I’m in heaven!