Tues Oct 17th
10:45pm As usual breakfast was waiting for us as we stepped into the dining room. Delicious. Today we were heading out to Provencale. It was a 2 1/5 hour drive away but, was all highway driving so I didn’t need my Dramamine plus I’ve been sitting in the front seat. (Thank you fellow travelers). Our first stop was the Le chateau de Grignan, a 16th century historic castle also the largest renaissance chateau in the south of France. 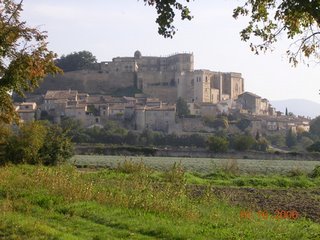 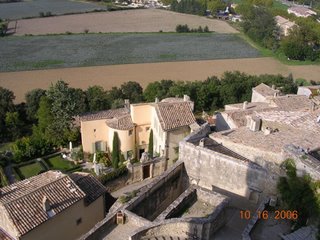 In the 17th century the castle was badly damaged during the French Revolution, but was saved at the beginning of the 20th century when it was purchased privately and underwent extensive restoration. 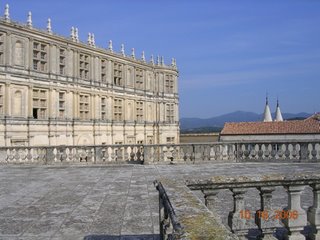 The castle also owes its celebrity to one of the women of French Literature, Madame de Sevigne who stayed there visiting her daughter and died and was buried there in 1696.

Our next stop was the medieval village of Poet-Laval, where lavender fields were first discovered. This is the oldest village in South France dating back to 1028 with the castle having been visited by the actual Knights of the Templar. 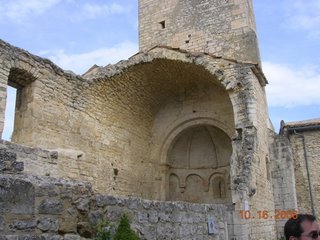 I sat for a moment on the stone remains and tried to visualize them.

Sadly to say I couldn’t. But just being there was thrilling.
We ate lunch in the most charming sidewalk café, and I had the best omelet I ever had. With potatoes, onions and bacon inside, this omelet was juicy and tasty and came with a garden salad instead of french fries. Oh la la!

Our last stop for the day was the quaint village of Dieulefit. Known for its linens and pottery this village was actually built into the side of a mountain. 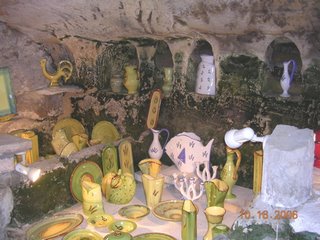 One of the stores actually turns into the cave once you pass the entrance door and all the merchandise is displayed on carved shelves in the cave walls.
We have a mouthwatering dinner and called it quits to a long but satisfying day