Wed Oct 25th
9:00pm I was hoping to get online at McDonalds this morning , but no wi-fi was available. I ate breakfast instead and they have good yogurt. Tastes like the yogurt in the country, vanilla pudding with a slight edge. The McDonalds here are much better than the ones in the states. 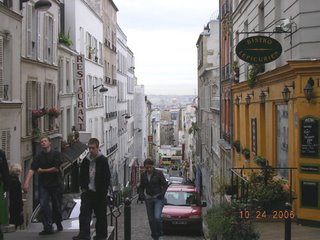 I headed up to Montmartre via Metro and got off at Pigalle right in the heart of “Pig” Alley. 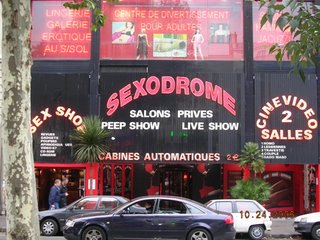 Translated that means the seediest part of Paris where all the sex shops are. And they are plentiful, right next to each other, block after block. Boy this can top New York City which is almost void of sex shops. 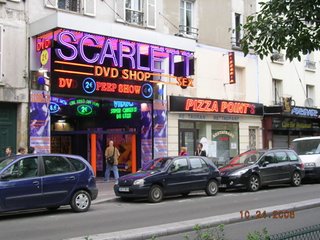 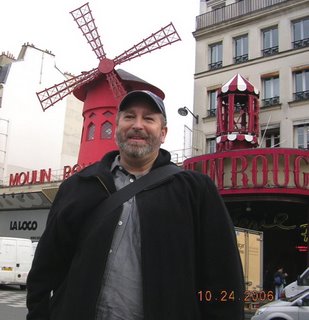 That’s where the Moulin Rouge is, so I stopped to have my picture taken in front by a group of teenagers, we took pictures of each other.

I followed the walking tour map in my Rick Stevens Paris guide book 2006 (very good book by the way) and I passed the homes of: Picasso, Toulouse-Lautrec and Van Gogh.

I also passed the last windmill standing in the area. 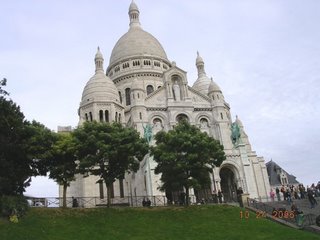 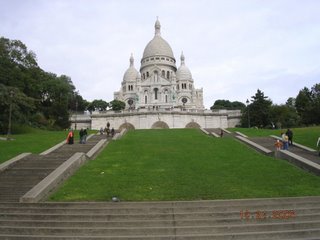 Further up was Sacre Coure Basillica. 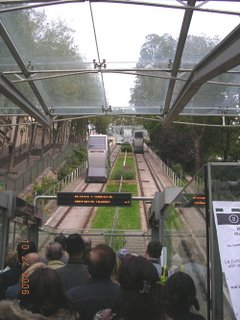 I took the funicular because I was too tired to walk up all those steps. 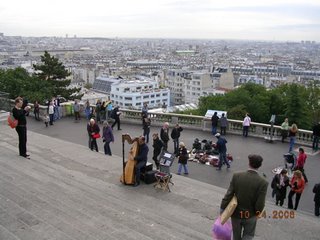 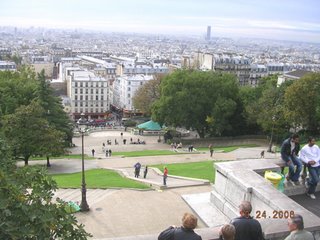 The view from the top is the highest area in Paris at 420 feet. I stared out at the view and for as much as I was loving Paris, for the first time I felt homesick. It would be different if I had a job and an apartment here, but I think it is time to go home.

I was feeling very tired again (after walking up all those hills in the area) and headed back to my hotel. I feel I did the best I could in the 4 days of my stay here. I didn’t see the statue of St. Denis so I’ll tell you the story. The roman soldiers where taking him up to the top of the hill to behead him for trying to spread the word of Christianity. They were tired and stopped before reaching the top. They beheaded them where they were and the body stood up, wiped the head off, and walked the three miles to the top of the hill with his head in his hands, and then collapsed and died. So all the statues in Paris of St. Denis show a beheaded man, holding his head in his hands. Quite a story!

I came back to the hotel and Travis stood me up (not much to say for his American arrogance). Richard had been at the dentist and was not up to meeting, but we spoke on the phone for a while and his is a very nice guy. I followed his website closely for the secrets of Paris and you can view them at: http://ipreferparis.typepad.com/i_prefer_paris/ 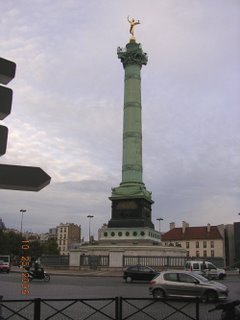 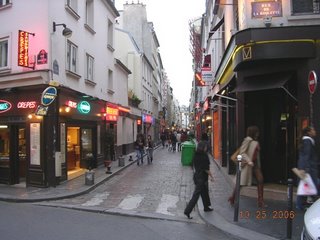 I decided to walk towards the Bastille where I hadn’t been before for my last night’s dinner in Paris. I had a wonderful meal of strips of beef dredged in flour and sautéed in Brandy and crème with mushrooms and served with a veggie pate. Yum!

I sat in another sidewalk café with some espresso and crème bruele, and watched all the locals walk by. 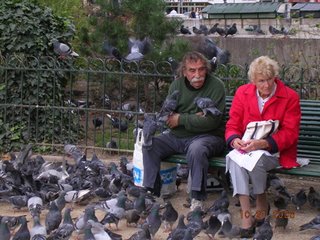 What a marvelous city, and I know that I will be back to visit again. As I walked to my hotel I kept passing pastry shop and thought that I pretty much stayed away from most of them for my stay here. 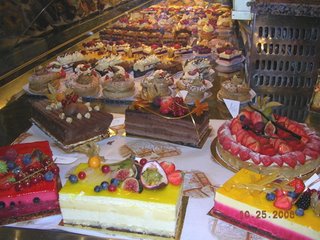 Next thing I new I went in and bought a pastry to take back to the hotel room with me. And in the style of France it was a Napoleon! Viva La France!